What to Know About Concussions

Years ago, if you got hit in the head when playing sports, there wasn’t as much information about the serious nature of concussions. An athlete might say they got their bell rung or their coach would tell them to shake off the cobwebs. In recent years, research has revealed a great deal of new knowledge about concussions and how they affect someone. Today, we’re going to take a look at some of the things you need to know about concussions. Whether you’re an athlete or you’re trying to keep your child safe as they start playing sports, this information is important to know. At NeuraPerformance, we utilize state-of-the-art techniques and equipment for better brain health and function. Call today to learn more. 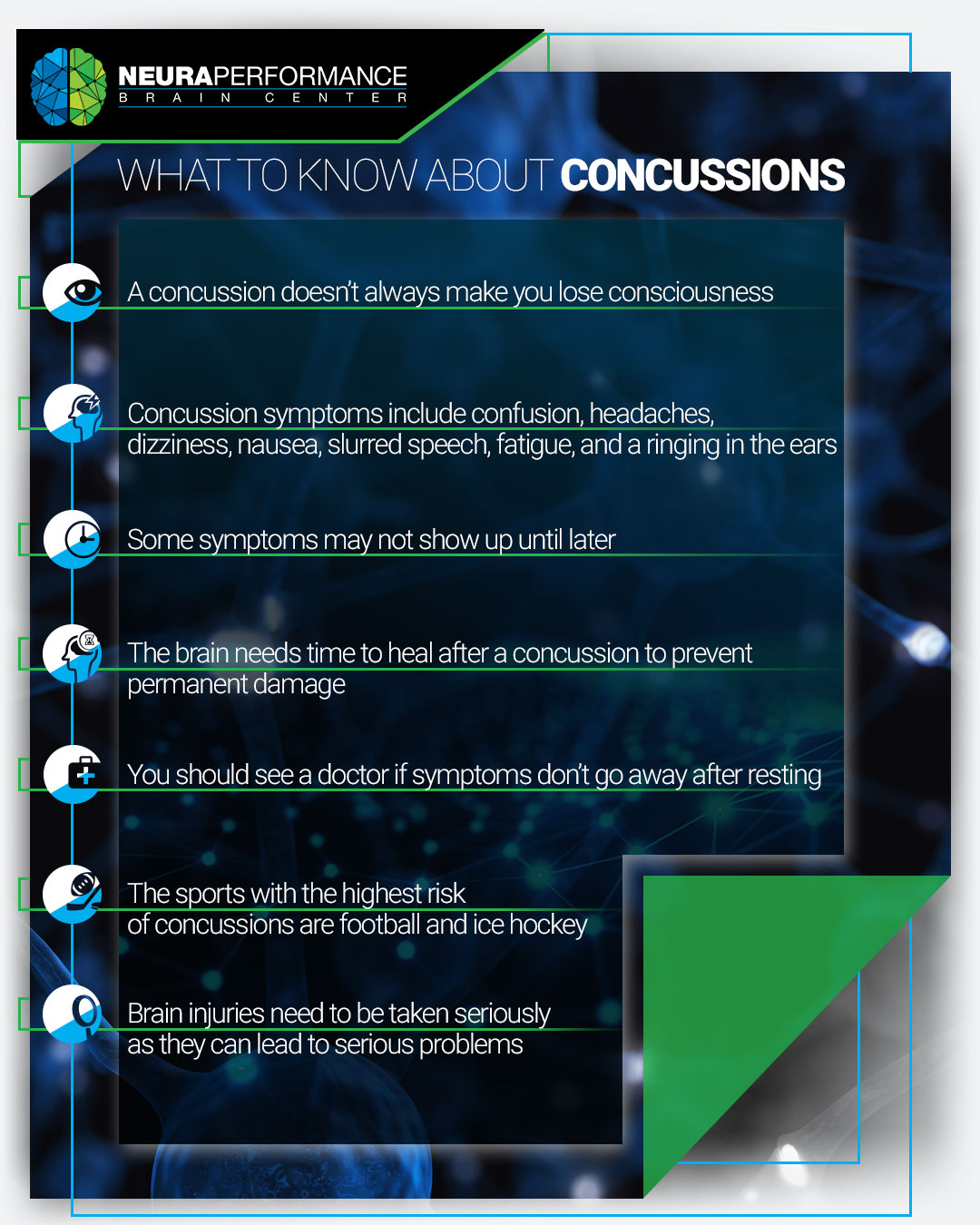 It is important to know what the symptoms of a concussion are. They can include:

While these symptoms on their own might not raise many red flags, if they are combined it is something to keep a close eye on. If a combination of symptoms lingers, it is most likely due to a concussion. More serious concussions can also carry the very scary symptom of amnesia.

While the symptoms listed above will be noticed shortly after a concussion, there are some other symptoms that may come up later. If you experience or notice an increase in irritability, memory issues, or depression, it may stem from the concussion and should not be ignored.

Your brain is incredibly sensitive. Just like any other injury, a head injury requires time to properly heal in order to avoid causing long-lasting damage. This doesn’t just include physical activity, as mental exertion needs to be limited as well. Schoolwork, playing video games, and watching TV can all make symptoms worse.

If symptoms don’t go away after a little while, it’s very important you see a doctor as soon as possible. This is especially true if you are having problems with your memory following a concussion, as this can be a sign of serious issues that will only get worse.

The sports with the highest risk of concussions are football and ice hockey, with much of the game requiring a great deal of contact between players. With that said, non-contact sports like skiing and biking can also be risky.

Gone are the days of “shake it off”; it’s unsafe and irresponsible. If a concussion is left untreated, the brain will not heal properly. When concussions are severe or someone suffers from multiple concussions, serious health issues can arise. People with multiple concussions are at greater risk of developing epilepsy, vertigo, changes to their personality, Parkinson’s disease, dementia, and death. It’s not something to ignore.

Concussions are incredibly serious and more is being learned about them all the time. If you would like to learn about protecting yourself or treating a concussion, call NeuraPerformance in Denver. We’ll be happy to answer any questions you might have.

Contact
Want to get in touch with us?
(855) 955-9727
Our Locations
Patient StoriesArticlesThe Plasticity® DifferenceFAQsPrivacy Policy
Free Consultation
Schedule a call.

Plasticity® Centers © 2022
Contact
How would you like to get in touch with us?
Free Consultation
Schedule a time right now.
Have Us Contact You
Give us your information and we'll be in touch